CINCINNATI — Before new Cincinnati Bengals assistant Steve Jackson flipped on his computer’s camera, he needed to get into character.

He put on a pair of black-rimmed glasses and reached into his closet for a plaid, multicolor sport coat, one that looks like it belongs at a country club instead of a virtual meeting with the team’s defensive backs.

Even if he looked like a game show host, he was still a football coach. And despite the inability to see players in person, coaching still needed to be done.

Joe Burrow will be counted on to resurrect the Bengals. And it seems like a logical progression from his high school days in southeast Ohio. Story »

Like the rest of the NFL, the Bengals are adjusting to an augmented start to the offseason in the wake of the coronavirus pandemic. Part of that is using tools such as Kahoot!, an educational game used in classrooms, or in Jackson’s case, virtual “Jeopardy!”

During a pivotal offseason, sharing information is only one of the objectives for the Bengals’ coaches. They also are gauging how the virtual workouts will translate to the field if and when games occur this fall.

“You start seeing them start to strategize and work together and compete, basically, together,” said Jackson, who works with the defensive backs and is in his first season in Cincinnati. “There are so many subtle things that it brings out, and if you’re watching, you get a chance to see them grow and develop just in that small amount of time.”

The Bengals, like the rest of the NFL, are trying to navigate the closed team facilities while grappling with the global pandemic. Cincinnati is doing that while trying to improve the worst team in the NFL last season.

When Jackson was an assistant in Washington in 2004, he came across the version of “Jeopardy!” used by another assistant. Over the years, the game went from one on whiteboards to a PowerPoint presentation that features the game’s music and a timer.

Jackson typically used Saturday meetings to review concepts before game days. He brought the game with him to Cincinnati.

On Zoom video calls, he paired up his new players and gave them five categories to choose from — scheme, culture, teammates and coaches, technique, hand signals. If someone picked a culture question, one might have to know two team rules or the five pillars of the team’s defense. Jackson said veteran safety Shawn Williams was immediately into the game and eager to win.

Cornerback Winston Rose, Williams’ teammate in the game, said everyone was mostly quiet during meetings because they didn’t know each other that well. Rose, safety Vonn Bell and cornerbacks LeShaun Sims and Mackensie Alexander all signed with the Bengals this offseason.

Rose, who spent the past three seasons in the Canadian Football League, said the game changed the atmosphere among the defensive backs.

“After ‘Jeopardy!’ everybody started laughing and kind of opening up a little bit,” said Rose, who is still waiting to move to Cincinnati from Los Angeles. “I feel like it broke some shells.”

With each meeting, Rose said, the familiarity is slowly increasing as everyone gets a feel for each other. His position coach is doing the same thing.

Jackson said it was easy to tell if the instruction was getting across to his players even while he was at a distance from them and not in a classroom.

Jackson isn’t the only one looking for creative methods during the offseason. Bengals assistant James Casey, who works with the tight ends, picked up on Kahoot! after head coach Zac Taylor used it once last season. 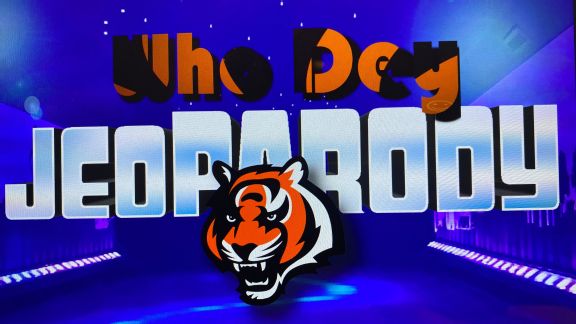 Casey initially was apprehensive about doing everything virtually. Over time, he gained enough comfort to share his screen and conduct real-time quizzes using the game app. He’ll pull up the questions on his monitor while players answer as quickly as possible on their own devices and earn points along the way. It’s a way to provide instruction without always having to lecture and watch film.

“At the end of it, you learn a lot of football, but at the same time, you have a little fun. Everybody likes competing,” Casey said.

Casey and Jackson’s methods elicited praise from Taylor during a Zoom teleconference with reporters last week. One of the challenges during this offseason is making sure players are engaged despite not being physically present during voluntary workouts. The second-year coach said he feels like things have gone as well and as efficiently as he hoped.

“It is unfortunate you don’t get the physical reps on the field,” Taylor said. “That is something every team would like to have, but no other teams have it so we’re just going to make the most of this virtual opportunity.”

For a team as bad as the Bengals, every detail counts. When Jackson watches the responses during his quiz game, he sees how players respond to wrong answers or small defeats. He knows how that might translate to the field.

“Who’s going to laugh things off if they get beat for a touchdown?” Jackson said. “Who’s going to go into the tank if they lose? There’s a lot of carryover when you start talking about competing.”